Those who are familiar with Bandar Saujana Utama would be aware that it is encircled by large areas of lush vegetation. This widespread of flora covers areas such as Puncak Alam, Sham Alam and vast parts of western Kota Damansara. Bandar Saujana Utama is relatively close to a popular local landmark, UiTM Puncak Alam, and is home to the Mayang Sari landed residential development. Accompanied by greenery, Mayang Sari encompasses contemporary traits which redefine comfort and urban living.

Developed by prime real estate developers, Glomac Bhd, Mayang Sari emerges as a fresh and modern township within Bandar Saujana Utama that caters to those who treasure serenity, peace and tranquility. Being away from large cities such as Shah Alam and Kota Damansara, this development has all the markings of an ideal place of dwelling. It comes with facilities and amenities that include a clubhouse, mini market, playground, basketball court, par cause, futsal court, scenic walk paths and many more. A short drive out of the residential development would take prospective buyers to other amenities such as cafes, restaurants, convenience stores, banking facilities and public schools, to name a few.

The Mayang Sari development is strategically located away from many of the busy cities in Klang Valley. It is tucked in the matured city of Saujana Utama which is self-sufficient in many ways. This city houses businesses that span across industries such as food & beverage (F&B), automotive, wholesale, retail and even agriculture. Tucked amongst various forest reserves, Mayang Sari is also popular with homestays that accommodate occasional tourists. Based on these factors, Bandar Saujana Utama is poised to be one of the more robust cities in the northwestern part of the nation’s capital, Kuala Lumpur. In addition, prospective buyers of Mayang Sari can hope to build their family units on a long-term basis as higher learning education institutions such as UiTM are available within close proximity.

Prospective dwellers of Mayang Sari can expect seamless travel within Bandar Saujana Utama which has just about anything and everything. The development site connects to the centre of Bandar Saujana Utama via Persiaran Saujana 4, stretching approximately 600 meters. This stretch arrives at a main intersection which is made up of Persiaran Saujana 1 that connects the east and west regions of the city. Bandar Saujana Utama spans across a radius of approximately 1.5km and branches out to Persiaran Mokhtar Dahari to the west and GCE to the east, both of which are connected via Persiaran E1/1. Persiaran Mokhtar Dahari connects to Puncak Alam to the north and Sham Alam down south, while GCE links to Denai Alam and Subang down south and Kuang up north. Geographically, these roads would provide prospective residents of Mayang Sari with seamless connectivity to most of the western regions of Klang Valley.

Bandar Saujana Utama, in which Mayang Sari is situated, mostly houses eateries and cafes towards its southern and eastern fronts. Towards the south, these outlets line the main road of Persiaran E1/1 and are approximately 1.2km from the Mayang Sari development which sits up north. Prospective residents of Mayang Sari can expect to be spoilt for choice with various local and international cuisines in this area. Some of the most popular haunts here include Restoran King’s Kambing Bakar Sulawesi, Restoran West MY Plate, Tokai Burger, Teratak Sukkeri, Boraq Boraq Cafe, Restoran Resepi Kak Ayu, Warung Nasi Ayam Muallaf and many others. These places of dining are located specifically along Jalan SP 11/1, Jalan SP 11/2 and Jalan SP 11/3, all of which stretch to a total of about 800 meters. Towards the eastern end of Persiaran E1/1, on the other hand, is where various groceries or daily needs can be found. Some of the outlets that have these essentials include 99 Speedmart, MR DIY, BiG Pharmacy, Pasaraya Best and 7-Eleven, among many others. All of these outlets are centred around the local favourite, Saujana Utama Mall which houses a hair and beauty centre as well as various retail and apparel outlets. The mall is approximately 2.5km from Mayang Sari via Persiaran Saujana 4 and Persiaran Saujana 3.

Bandar Saujana Utama is definitely not short of public schools as it has over 10 types within a 1.5km radius. The closest ones to Mayang Sari are SK Saujana Utama and SMK Saujana Utama which are along Persiaran Saujana 4, roughly 1km from said development. Not far towards the west are schools such as Sekolah Rendah Islam Darul Ulum, Sekolah Rendah Islam Al-Hakeemi Saujana Utama and SK Seri Pristana. As far as healthcare facilities are concerned, Bandar Saujana Utama has a wide range that caters to varying needs. Along the same row as the aforementioned stretch of eateries are Klinik Dr Muiz, Klinik Pergigian Dr Halid and Klinik Siti Seri Pristana. Closer to the Saujana Utama Mall are healthcare facilities such as Klinik dan Rumah Bersalin Nor, Klinik Saujana and Klinik Medicare, just to name a few.

Below is the complete list of amenities and facilities around Mayang Sari:

The Mayang Sari development consists of double-storey terrace houses which range from 1,815-2,175 sq ft in built-up size. The intermediate units which are 1,815 sq ft and 22×75 ft in built-up and lot size respectively come with 4 bedrooms and 3 baths. The corner units also come with the same amount of bedrooms, baths and lot size but have a total built-up of 2,175 sq ft. This is largely due to extra land available from being a corner unit. The ground floor of Mayang Sari’s units is made up of a spacious living room, wet and dry kitchens, utility room, guest room and an adjoining bath which connects to said room and wet kitchen. The first floor of the intermediate units come equipped with a family area, shared baths between two rooms and a master bedroom with its own bath. The corner units are almost similar to the intermediate units but enjoy a balcony which oversees its plot of land. The front porch for both units are able to comfortably accommodate two vehicles each.

Below is the dimension for the intermediate unit available at Mayang Sari: 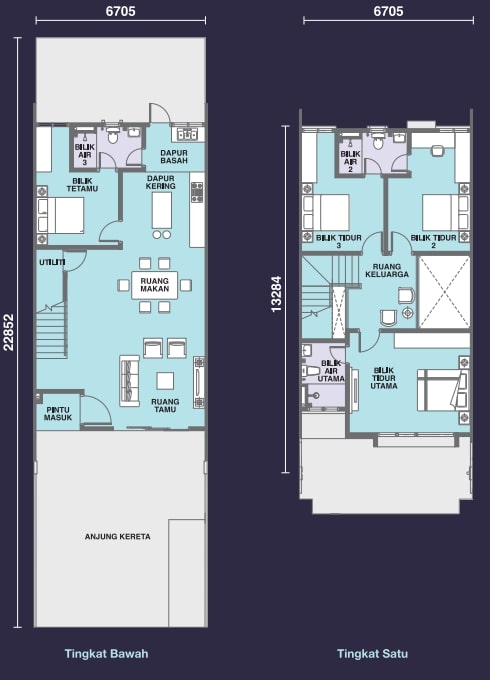 Judging from the above dimensions and diagrams, both the intermediate and corner units of Mayang Sari can accommodate large family units. Seeing as both units have 4 bedrooms and 3 baths, it would be plausible for families with 5-6 members to live comfortably within its bounds. The intermediate units would appeal more to those who prefer basic living, while corner units would certainly grab the attention of those seeking garden space and a balcony on the first floor.

Mayang Sari is expected to be one of the most sought after developments around the Bandar Saujana Utama region. It is situated a stone’s throw away from the mature city centre which houses various businesses across a myriad of industries. That said, prospective residents of Mayang Sari can expect to seek employment in said city and live only a couple of minutes away from their workplace. Residents could also find themselves settling down for the long term as there are umpteen essential facilities around such as primary and secondary schools as well as tertiary education institutions. In addition, Bandar Saujana Utama is peppered with various eateries and shopping options which cater to every age generation.

That said, the project would likely hit home with large family units of about 5-6 members who seek quaint living within an enclave of foliage. Where price range is concerned, families with joint incomes that fall within the middle-class bracket can certainly afford the intermediate units of Mayang Sari. Prospective buyers within the upper-middle class bracket would certainly be able to opt for the corner units should they wish to have garden space and a balcony overlooking it. The project would also certainly bear fruit for property investors who could see their property value increase exponentially due to the maturity of Bandar Saujana Utama.

Prospective buyers around the Bandar Saujana Utama area can expect to fork out RM281 per sq ft for a unit at Mayang Sari. Compared to similar residential developments in the area, Mayang Sari stands out for being the most cost-effective and checking all the important boxes for prospective buyers. Forest Hillpark, which is located further to the west of Bandar Saujana Utama, is a township of its own and consists of scenic nature paths within its compounds. The units available at this development are relatively smaller in built-up sizes compared to Mayang Sari and more pricey at RM375 per sq ft. This steep cost could be due to its concept of creating an exclusive serene environment which is only accessible to residents. Also, Forest Hillpark was completed in 2015 and would have experienced an ascend in valuation over the years. Eristana, on the other hand, is a project which sits approximately 300 meters from Mayang Sari and was completed in 2019. A unit here costs RM252 per sq ft and is much smaller compared to Mayang Sari. For Eristana to command such a price tag with smaller built-up sizes, it is safe to conclude that Mayang Sari would definitely be the ideal option around Bandar Saujana Utama.

Glomac Berhad was founded in 1988 and has since become a household name in real estate development in Malaysia. The enterprise comprises over 55 subsidiaries which delve in areas that include property development, property management, property investment, construction and car park management.

Strategically located within the lush greenery of northwest Klang Valley, Mayang Sari is poised to be a prominent residential development in the Bandar Saujana Utama region. The development is not only well-connected to the greater Klang Valley via highways but also holds treasures of its own. With anything and everything within sight, prospective buyers can rest assured to indulge in absolute tranquillity with a touch of convenience. 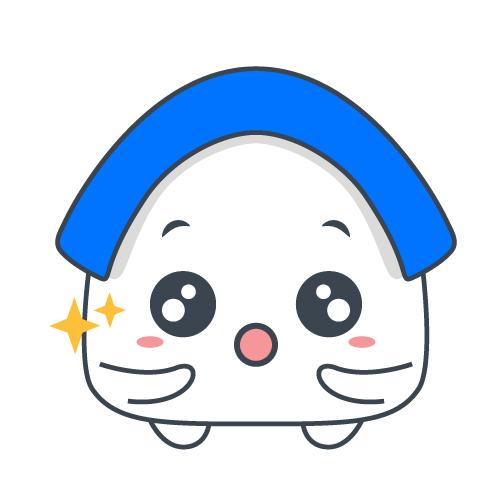